The next generation of aspiring film and TV professionals are, for the second year, being offered an incredible opportunity to learn from seasoned industry professionals at the ‘Brilliantly Talented Workshops’. The workshops will take place from Monday 18th to Friday 22nd August at Kings International College, Camberley. 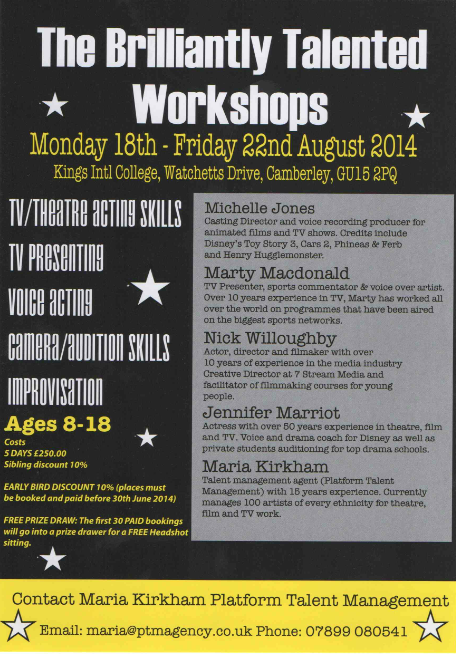 Casting director Michelle Jones and talent agent Maria Kirkham, have come together for the second year and have put together an incredible team. Over the course of the week, kids between 8 and 18 will be schooled in singing, acting, TV presenting, voice over, improvisation, audition skills and percussion with a difference!

The team consists of Nigel Clarke, best known for his presenting on ITV, CBBC and Disney Channel and in the West End in shows such as Stomp. Nigel will deliver a Stomp percussion master class and bring his experience from the Lion King to the singing team. Nigel is an incredibly popular and respected presenter and role model for kids.

TV Sports presenter and commentator Marty MacDonald has travelled the world presenting and commentating cycling and BMX for channels such as Eurosport, SKY Sports, ESPN Star and NBC Universal. Marty is known for his infectious, energetic style.

Actress and voice coach Jennifer Marriott has over fifty years experience in TV and theatre with credits such as Grange Hill and the West End show, Daisy Pulls It Off. As a voice coach Jennifer has worked for the Disney Channel ‘Art Attack’ show and has prepared students for auditions to top performing arts academies.

Actor, director and filmmaker Nick Willoughby brings over a decade of experience to the team. His experience in the much needed world of ‘on camera’ audition skills for TV and film works perfectly and will bring together all the skills learned throughout the workshops for little starlets to head for Hollywood!

Michelle Jones explains, “Having been so heavily involved in the film and TV world through Disney and now Brilliant Casting, this provides such a unique opportunity for aspiring youngsters, not only to work with us, but also for us to potentially talent spot kids for the future.”

“Everyone loves stories of how a famous actor was plucked from obscurity for a major role in a motion picture and you never know, through our network, we might just find the next one”.

Casting agent Maria Kirkham adds, “I put kids forward for auditions every day; at the moment they learn through the audition process. By setting up these workshops, they might just walk in next time and get the role. We have an amazing team who, in addition to being great industry professionals, are also a lot of fun! We had great feedback from the kids who attended last year and I think this year will be even better.”